Albertosaurus is a genus of tyrannosaurid dinosaur in the Jurassic World Evolution series. Originating in Late Cretaceous North America, Albertosaurus is physically similar to Tyrannosaurus, though is smaller, faster, and more slender in comparison.

In Evolution, Albertosaurus is available in the Claire's Sanctuary DLC, where it is introduced in the campaign as one of the carnivorous species facing extinction on Nublar North, and can subsequently be relocated to Sanctuary. Upon completion of the Claire's Sanctuary story missions, Albertosaurus becomes available in the main campaign by progressing through the Entertainment Division on Isla Pena, where its fossils can subsequently be excavated in the Dinosaur Park and Horseshoe Canyon formations in North America.

Very similar in appearance to Tyrannosaurus, albeit smaller and thinner, Albertosaurus is a large carnivore with small arms, muscular legs, and short bony crests above its eyes. Prior to the eruption of Mount Sibo, at least one Albertosaurus was brought to Claire Dearing's facility on Isla Nublar, along with Baryonyx and Carnotaurus, in order to research the disease threatening the island's dinosaurs with extinction. After the abandonment of Nublar, the Albertosaurus genome was available to the facility on Sanctuary.[1]

Albertosaurus is a unique addition to the Jurassic World parks, and can often be seen sniffing the air, ground, and water of its environment. Like other carnivores, it can eat from both the Live Bait and Carnivore Feeders, though it can also hunt a wide variety of dinosaur species, except for sauropods. While content with solitude, Albertosaurus can tolerate another member of its kind in the same enclosure, as well as up to eighteen other dinosaurs of varying species.

Due to abundant remains, especially from the Dry Island bone beds, Albertosaurus is one of the best-studied and understood tyrannosaurs. Its extensive range across multiple formations suggests that this was a common predator and the remains of juveniles and adults together indicate that they traveled together in family groups. Juveniles grew rapidly and may have reached adulthood at about 18 years, similar to humans. Typical Albertosaurus adults measured up to 9 m (30 ft) long and weighed 1.3-2.5 tons, while rare individuals of great age could grow to be over 10 m (33 ft) long and weighed 4 metric tons.

When compared to its later cousin, Tyrannosaurus, Albertosaurus is lightly built and more streamlined. This suggests it mainly chased down fast prey such as hadrosaurs, rather than tackling tougher prey such as ceratopsians or ambushing its prey. Some paleontologists have speculated that Albertosaurus could run as fast as 30 mph (48 km/h).

The skull was large and possessed fewer teeth than other theropods. When compared with Tyrannosaurus and other tyrannosaurs, its bite power is much weaker and it may have used bleeding bites instead of sheer power. Skin impressions showed that Albertosaurus was covered in scales, with large pebbly hexagonal scales on its back and smaller, diamond-shaped scales on its underside.

The remains of Albertosaurus are so extensive that the effects of certain diseases and parasites have been recorded on some individuals. The Albertosaurus featured in the game is heavier and slightly larger than the average size of its real-life counterpart. In reality, the dinosaur's lacrimal brow horns are more prominent and known from Albertosaurus close relative, Gorgosaurus.

Living from 71 to 68 million years ago, Albertosaurus was the apex predator of its ecosystem. Albertosaurus hunted other dinosaurs such as Pachyrhinosaurus, Styracosaurus, Parasaurolophus, Corythosaurus, and Euoplocephalus. 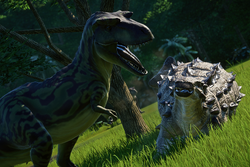