Acrocanthosaurus is a genus of carcharodontosaurid dinosaur in the Jurassic World Evolution series, which originated from Early Cretaceous North America.

In Evolution, Acrocanthosaurus is included in the Carnivore Dinosaur Pack, and can be unlocked by progressing through the Entertainment Division on Isla Pena, where its fossils can subsequently be excavated in the Antlers and Twin Mountain formations in North America.

In Evolution 2, Acrocanthosaurus is unlocked by researching and successfully releasing one in the Northwest USA Challenge Mode map, and subsequently become available in Sandbox mode.

Acrocanthosaurus is one of the largest theropod dinosaurs in the Evolution series. It is 14 m (46 ft) long from snout to tail tip and weighs 9.5 tons. It has a relatively large and long skull, very small arms and a long, heavy tail counterbalancing the head and its robust body. There are ridged crests above the eyes, similar to those of other carcharodontosaurid dinosaurs, such as Giganotosaurus and Carcharodontosaurus. The most prominent feature of Acrocanthosaurus (and what gives it the name "high-spined lizard") are its row of tall neural spines, located on the vertebrae of the back, hips and upper tail.

Acrocanthosaurus has a coffee/brown colored body with a creme underbelly. A creme colored stripe starts from the eyes and goes right up to the tip of the tail. An alternate pattern can be applied via gene editing that gives it dark, splotchy stripes that cover the entire body.

Acrocanthosaurus behaves very similarly to other large carnivores. It requires a large amount of grassland and some forest in their enclosures in order to be content. Due to its high comfort threshold, Acrocanthosaurus can become easily agitated if its requirements are not met. In comparison to carnivores like Tyrannosaurus and the Indominus rex, Acrocanthosaurus is more tolerant of its own kind, and can happily coexist with another member of its species, or live in solitude. The species also tolerates up to fifteen other dinosaurs in its enclosure.

When placed next to other larger carnivores and armored herbivores, Acrocanthosaurus will engage in death duels. Unlike other large carnivores who often bite their opponents during the attack, Acrocanthosaurus will headbutt their foe before biting down on them. It will hunt defenseless small herbivores and hadrosaurs, but It can cohabit with small carnivores such as Velociraptor, as the latter will avoid the large carnivore before combat.

Cleanup required
This article may need to be rewritten to conform to a higher standard of style, verification, or use of media.

One of the largest known carnivorous dinosaurs ever discovered, Acrocanthosaurus was first uncovered in Oklahoma by American paleontologists J. Willis Stovall and Wann Langston Jr. in the year 1950. When it was first discovered, Acrocanthosaurus was originally thought to be closely related to the Jurassic predator Allosaurus. However, in the 1980s, given the spine on its back, it was then thought to be a species of spinosaurid. Eventually, in the year 2013, cladistic analyses have found it to be a carcharodontosaurid, therefore, related to Carcharodontosaurus of Africa and Giganotosaurus of South America.

Perhaps the most notable feature of Acrocanthosaurus, hence its name, was its row of tall neural spines, located on the vertebrae of the neck, back, hips and upper tail, which could be more than 2.5 times the height of the vertebrae from which they extended and supported a ridge of muscle over the animal's overall upper body. Most other dinosaurs also had high spines on the back, sometimes much higher than those of Acrocanthosaurus. For instance, the unrelated Spinosaurus had spines nearly 2 m (6.6 ft) tall, about 11 times taller than the bodies of its vertebrae.

The lower spines of Acrocanthosaurus had attachments for powerful muscles like those of modern bison, probably forming a tall, thick ridge down its back. While the exact function of the spines remains unknown, they may have been involved in communication, fat storage, muscle or temperature control as well as potentially to attract mates. All of its cervical (neck) and dorsal (back) vertebrae had prominent depressions (pleurocoels) on the sides, while the caudal (tail) vertebrae bore smaller ones. This is more similar to carcharodontosaurids than to Allosaurus.

Acrocanthosaurus lived in the Twin Mountains and Antlers Formations which were large floodplains that drained into a shallow inland sea. The Acrocanthosaurus coexisted alongside numerous types of dinosaurs in its environment, such as the smaller theropod Deinonychus, the ornithopods Iguanodon and Tenontosaurus, the spiky nodosaurid Sauropelta, as well as the titanic sauropod Sauroposeidon. 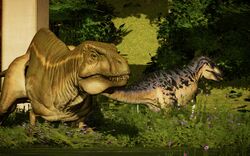